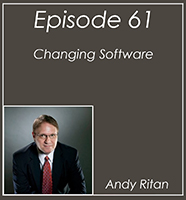 Are you looking at other software platforms, and enticed by the shiny new offerings? If so, this is absolutely the episode for you. I’m joined today by Andy Ritan to talk about his software switch, including all the trials, tribulations, and lessons learned in the process. Andy, a long-time friend, is an Atlanta-based property manager with about 240 doors, and today we’ll be doing an after-action review for his software switch.

I love offering listeners fantastic benefits, such as some great discounts for products, with new offers coming all the time! You can see a complete list at propertymanagementmastermind.com. For all of these offers, use the discount code “Brad” to secure your discount.

Are you looking at other software platforms, and enticed by the shiny new offerings? If so, this is absolutely the episode for you. I’m joined today by Andy Ritan to talk about his software switch, including all the trials, tribulations, and lessons learned in the process. Andy, a long-time friend, is an Atlanta-based property manager with about 240 doors, and today we’ll be doing an after-action review for his software switch.

Andy switched from AppFolio to Rent Manager, and then actually switched back to Appfolio. He points out that the initial switch out of AppFolio was complicated since AppFolio owns its data and doesn’t offer a simple way to export or transfer it. Instead, you need to do it all manually. Andy recommends using outside labor to do this migration process rather than using your own team.

The reason that Andy decided to switch from AppFolio to Rent Manager was to find the best API in the business. (And even now that he’s back with AppFolio, he still suspects that Rent Manager has the best API.) Despite doing an extensive amount of research before making the switch, Andy had what he calls a “dreadful experience” and the worst business decision he’s ever made with Rent Manager.

Don’t miss this episode, in which we’ll give a deep look into the pros and cons of these two platforms, as well as the process of switching back and forth between them. You’ll also learn exactly what prompted Andy to switch back (which involved a case of fraud thanks to a lack of two-factor authentication). We hope this conversation helps you to make the decision about whether to switch platforms, and understand why doing your due diligence sometimes isn’t good enough.

[02:17] - Brad welcomes listeners to today’s conversation with Andy Ritan, a property manager from the Atlanta area.

[04:44] - Andy offers listeners some background into who he is and what he does.

[06:30] - To start things off, Andy digs into the initial exit from AppFolio, which was complicated since AppFolio owns its data.

[10:42] - What initially convinced Andy to leave AppFolio and move to Rent Manager instead?

[14:48] - Andy talks us through some of the research that he did when he was deliberating over his choice to switch.

[17:00] - We hear about Andy’s “dreadful experience” of using Rent Manager from his honest perspective.

[20:15] - Brad and Andy elaborate on the point about needing to get off the phone, do research, then call the owner or tenant back because the system was so slow.

[22:50] - Andy talks about the reconciliation process in AppFolio, and shares two problems that he had with it in Rent Manager.

[29:42] - Andy defines the triple tie, and explains why he prefers AppFolio for this purpose rather than Rent Manager.

[37:00] - Andy explores the limits and costs of customization that he saw in the Rent Manager platform.

[40:16] - We learn more about two-factor authentication and how it has worked for Andy at Rent Manager and AppFolio.

[44:12] - Andy explains that the fraud incident that he just described was the final straw that sent him back to AppFolio.

[45:56] - Brad mentions that a workflow management system is absent from all of the systems available now.

[48:09] - Andy sums up the experiences that he has been talking about today.

[52:03] - Brad shares some lessons that he’s learned from this conversation.

Get notified when a new episode comes out!

We want to hear from you. Help us improve.

The Host of this Podcast is Brad Larsen from San Antonio, Texas. Brad is the founder and owner of RentWerx, one of the fastest growing residential Property Management companies in Texas that currently manages over 700 single family homes.

Get Notified. Improve Your Business.

Subscribe to our Newsletter and receive 10% off on your next product purchase.