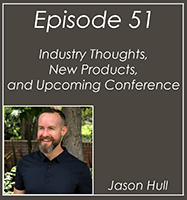 Jason Hull from DoorGrow joins me today to talk about his upcoming products, some of his new products, and some of the new systems he’s getting ready to present at his conference. It’s a great conversation to hear about what’s going on in the industry and stay up to date.

In our chat today, Jason points out that he doesn’t have a property management business in the traditional sense. Instead, he started a web design agency in 2008. At the same time, his brother had bought into a property management franchise. (As a side note, his brother’s franchise now has 1,200 doors.) Jason noticed that most of the websites in the industry at the time had the wrong focus, and built his brother a marketing-oriented website instead. A lot of the top franchises in that company started working with Jason, and soon he was on Google’s first page for property management website design.

Before long, Jason had clients all over the US. This led to him getting intimately familiar with property management businesses. He put together a road map identifying the biggest leaks or constraints in sales pipelines, and found the keys that let a business grow past 100 doors. Using this information, he built a program called the Seed Program, which is the ultimate foundation for growth.

In our conversation, he’ll explain how his success with this forced his company to pivot, as their customers were outgrowing what they originally offered. He’ll dig into why it’s so important to invest in yourself before you ask anyone else to invest in you, why you sometimes need to get rid of some of your doors instead of keeping every single one possible. We’ll also take a deep dive into how to handle negative reviews, talk about the topics and guest speakers for Jason’s upcoming conference, and much more!

Here’s where you can find Jason:

[03:32] - Jason introduces himself, and shares his background and how he got started in property management.

[06:27] - We hear about what Jason does in more detail, and how he developed his Seed Package.

[11:55] - Jason loves entrepreneurism, and points out that you can’t segregate being an entrepreneur from your personal life or your physical body.

[14:07] - We learn about how Jason’s own coaching taps into his long-term goals for what he’s doing in the industry.

[15:30] - The “Cycle of Suck” is something that Jason identified. He explains what this is and how to get out of it.

[18:22] - How does Jason respond to negative reviews online?

[21:27] - Brad takes a turn to talk about how he deals with his own negative reviews, specifically when they’re unfairly negative.

[26:44] - Brad shares his thoughts on NARPM as an organization, and offers some ideas on things that could be better.

[32:34] - At DoorGrow, Jason’s vision and mission is to change the industry, he reveals.

[36:20] - We hear more about Jason’s upcoming conference, including its focus and the two major challenges that it will address.

[48:50] - At the conference, Jason will share his roadmap that he believes will create a high-growth company. He also mentions several other speakers who will be at the conference.

[49:56] - How can someone sign up for the conference? What discount do they get for using the code “BRAD”?

Get notified when a new episode comes out!

We want to hear from you. Help us improve.

The Host of this Podcast is Brad Larsen from San Antonio, Texas. Brad is the founder and owner of RentWerx, one of the fastest growing residential Property Management companies in Texas that currently manages over 700 single family homes.

Get Notified. Improve Your Business.

Subscribe to our Newsletter and receive 10% off on your next product purchase.